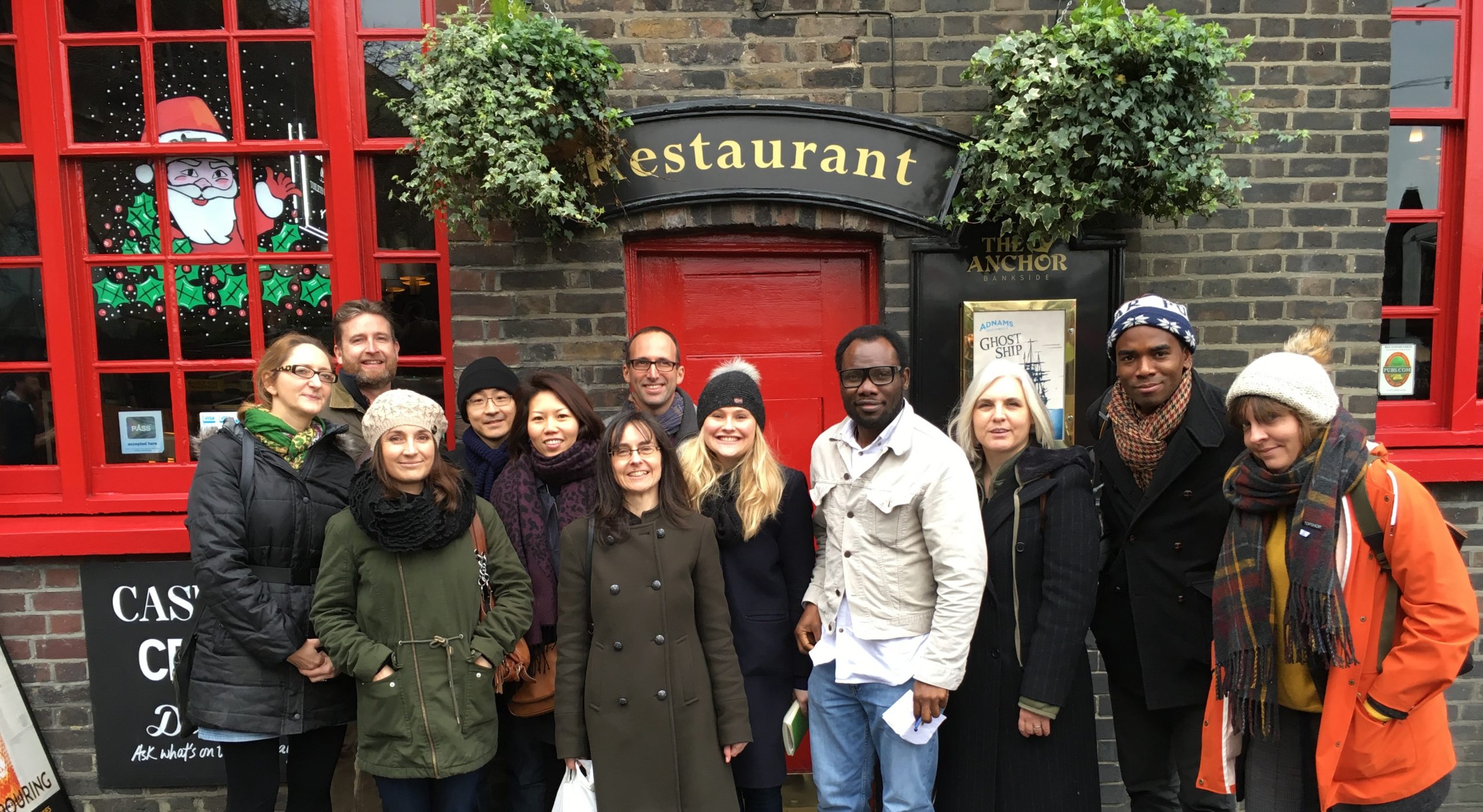 We decided to run a  Street Wisdom Adventure at the end of the first week of January, as we knew this would be a time when people would have some big questions in mind and would be looking for some big answers.

Sandie (@dilgers) my very wonderful co-facilitator and I, met our Twelve Adventurers opposite Monmouth Coffee in Borough Market. The day was very ‘full’ of weather – both foul and fair.  We started with lovely crisp sunshine, followed by heavy rain and then a dry spell ; all with heavy cumulus clouds chasing each other across the sky above our heads.

We had lots of big questions being asked and it was clear, when we met for our round up discussion, that a good deal of inspiration had been gained and some big answers found.

There were plenty of goosebumps created as immediate and powerful connections were made . The smells ,sights and sounds of the Market as it set-up for Friday lunch , provide a rich territory for stimulus and inspiration.

One participant wanted to build better relationships within the family and became aware , inspired by the sight of surrounding scaffolding, that the key was to build events and activities that would enable this. For another person, looking to start a new business, the sight of office workers at computers was a reminder about getting the set-up and structure of a business right.

The sight of a deflated children’s balloon, children on a school trip and a building housing a charity for adolescent girls; created some great connections around belonging,  working with young people and the nature of home. One person felt the process was made more powerful by simply raising his head, looking up,  and seeing the world from a uplifted perspective.

All in all a great gang, a great adventure and a wanderful way to start 2016. 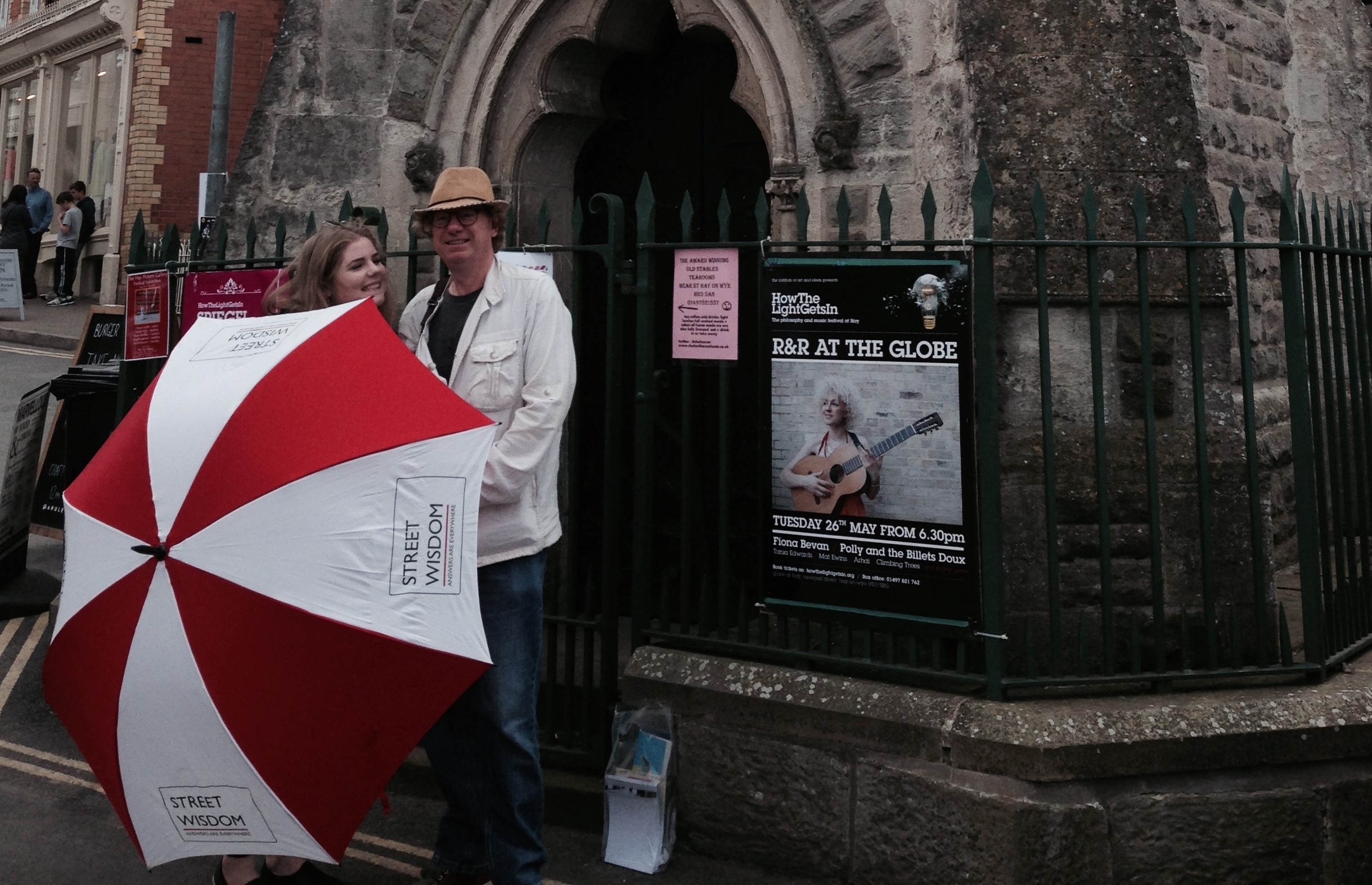 So this was the plan, right? I agreed with Street Wiz Mark , that we would attempt the, not insignificant, challenge of running a Street Wisdom Adventure during the Hay Festival…

You are probably already on board with the difficulties that might have arisen. First and foremost (not withstanding the powerful allure of a SW stroll) there is a LOT going on in Hay during the Festival. People overfill their diaries with the sumptuous cultural cornucopia on offer. They dash madly from a lecture on late Byzantine art to an interactive exercise in philosophy combined with t’ai chi (or something similar)
It can be hard to stand out in this kind of context…and so it proved. This Street Wisdom Adventure didn’t quite take off in the traditional way and although we did not manage to prise any people away from their Festival fayre; Street Wisdom delivered in exactly the way that is normally does – unexpectedly. And this is how –
Thanks to Mark, his lovely wife Rachel and their two daughters, for kindly putting me up in their beautiful and peaceful home.
The big (and rather marvellous) learning from my Grand Street Adventure to Hay, is that Street Wisdom doesn’t always deliver in the way you expect; but it never disappoints.
Here’s to the next Adventure!!
Nick Hammond 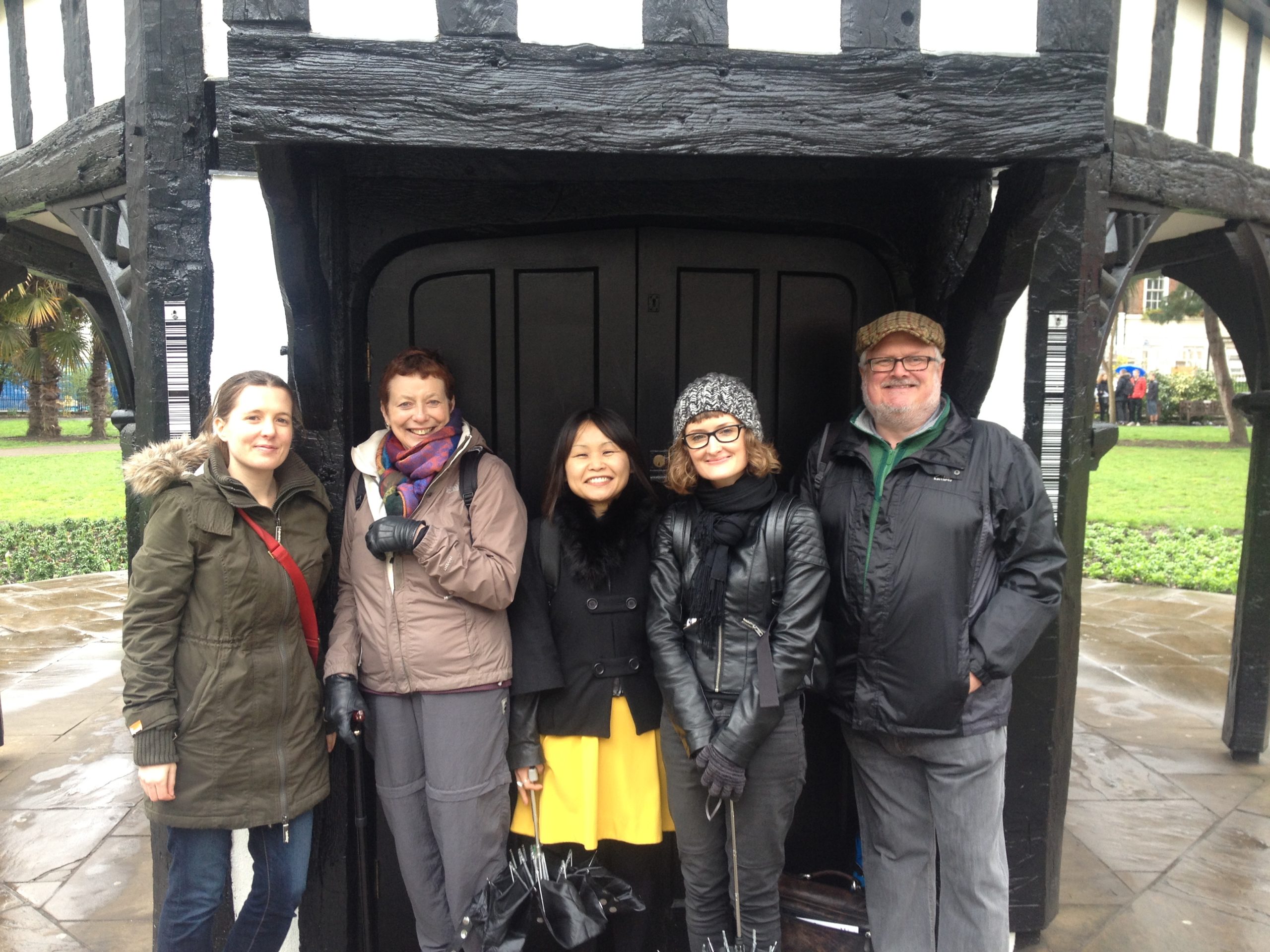 Despite the rain at the start, everyone was keen to get involved and really embraced the introduction and ‘street tuning’ exercises. The sun came out ( as if on order ) as the group headed off on their Street Quests, before we met at a local coffee house to discuss what they had all discovered.

There were some really interesting themes. One of my favourite lines was – ‘the importance getting lost before you can find what you are looking for’. One of the group, looking for a possible change of direction in life, saw a number of resonant signs and notices, whilst another literally bumped into an old acquaintance who works in a field that she is looking to move into ( coincidence….?). One member of the group loved the ‘permission just to wander’ and find new and interesting passageways that lead off, oft travelled thoroughfares.

Everybody felt the Street listening to them and their questions, and although not all received specific responses to their questions; the Street gave everybody plenty to ponder, the chance to look at the world in a different way and a relaxed and soulful start to the day. 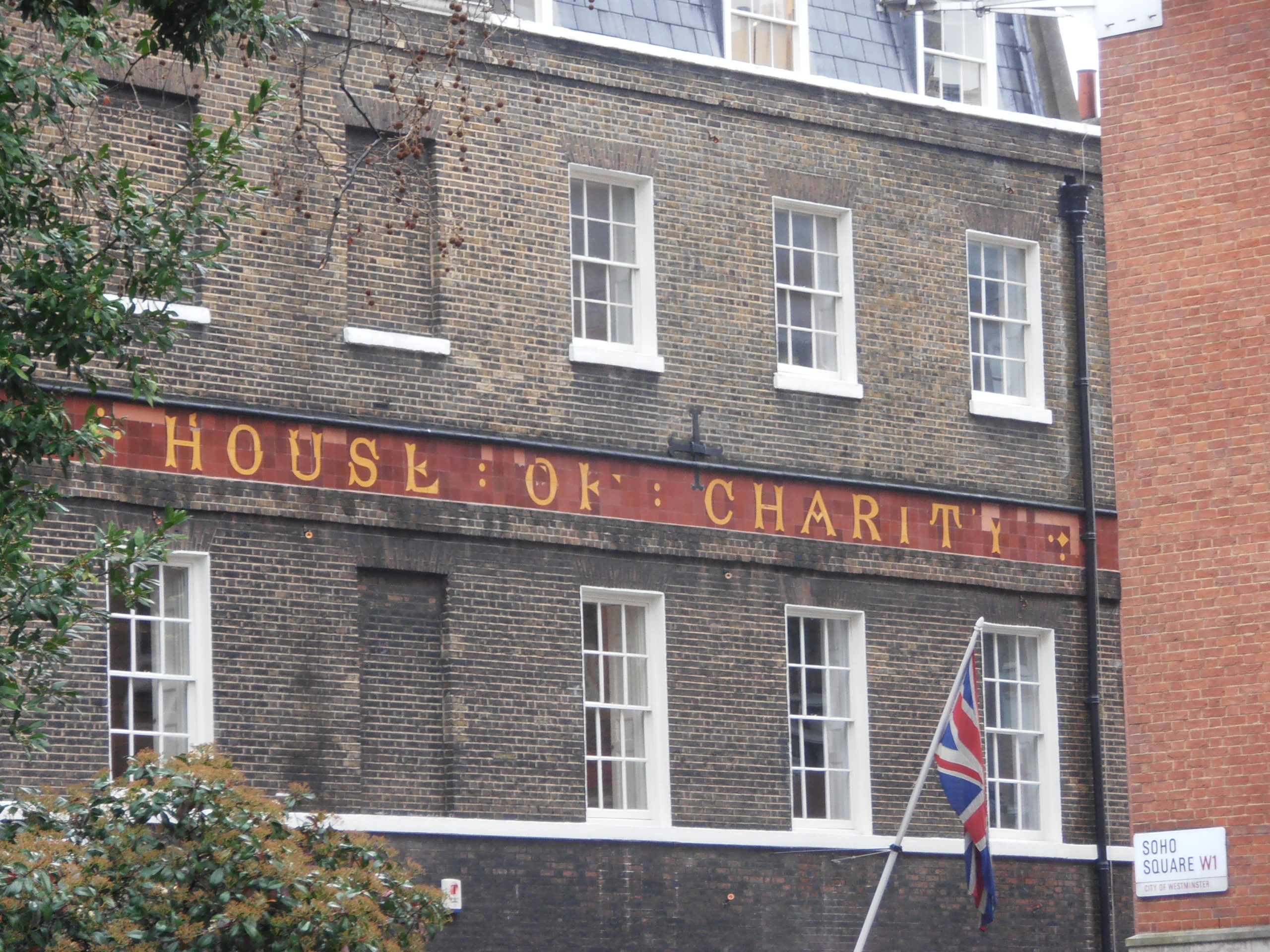 I’d have to put myself forward as one of those people who is somewhat sceptical about some (most) of those ‘out there’ concepts and techniques. My wife’s best friend had been a Bowen Therapist for quite some years before I would let her near me despite a catalogue of niggles, aches and pains. I eventually relented under protest and in severe pain from a back injury which was rendering me immobile and in agony. A poke here and a poke there (well, a few more than that) and I hobbled away full of doubt. A couple of days later, whilst not exactly leaping about the place, I was able to do up my own shoelaces without fainting with the pain… so, maybe, there was more to this mumbo jumbo than met my doubting eye.

Since then I’ve tried to be more open minded about such things, so a damp grey Thursday morning saw me joining 4 other explorers and our guide Nick in Soho Square to see what this was all about.

We started with a brief explanation of Street Wisdom and then went into a few tuning exercises each of about 5 minutes in order to prepare for our longer walk and exploration of our question.

I was surprised at how easily we all (yup, including me) seemed to drop into the technique and really gain unexpected insights and observations.

The BIG question session was, effectively, an extension of each of the shorter ones allowing us time to follow thoughts and patterns. I’ve been pondering accepting a voluntary trusteeship in a charity but to do so would mean taking up time that I could be doing other more fun or profitable things.

I noticed 2 buildings in the square… upon one were painted the words ‘House of Charity’ the other was a former Hospital for Women, supported by voluntary contributions. Further down the street was a sign for free wifi then, later, another for free hair consultations at a salon… suggesting it was OK not to charge for things? The sign for the restaurant L’Escargot with its picture of snails led me to question whether I had to rush into a decision or, possibly, that I was behaving like a snail… so get on with it.

Later in the cafe, talking about our walks, it came to me that an analogy I used to use in business could be applied to our learning. It’s like when you do a jigsaw puzzle. You start with all the edges to create a framework into which you drop the remaining pieces.

What I’d experienced in Street Wisdom was the tuning of my mind and a framework to recognise clues and to collect my observations. Whether I put them together in the right order or I discard some pieces is up to me but, maybe, the street does have the answers or, at least a route to them.

Not bad for an old sceptic, eh? 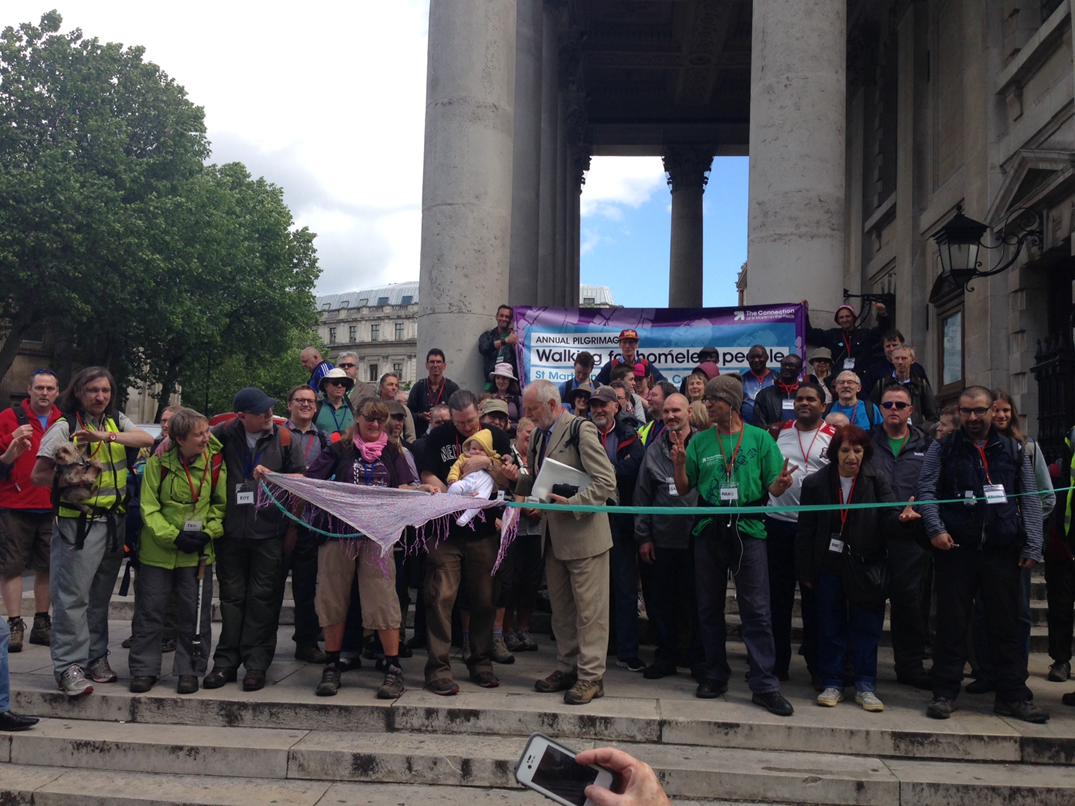 The Question I wanted an answer to –

‘How do I find the courage to do what I love, all of the time?‘

(or..increase the time I spend running Creative Thinking workshops, so that this becomes the thing that I do)

As we began, we saw the start of the Walking for Homeless People – Annual Pilgrimage, on the steps of St Martin in the Field. A pretty inspirational start to the day !!

I spoke with Pascal, busking in Trafalgar Square

I spoke to him because he looked like he had the conviction to follow his dreams.
He was inspirational – he talked about the positive power you create for yourself (and for other people) when you follow your dream

I paused in St James’s Square

Despite having worked in London for 26 years , I was last in this garden 24 years ago

I saw that some parts of the garden were carefully tended and others left to grow wild. This meant to me that some plans need to considered carefully and other times, you just have ‘to go for it’

Inspiration from the White Van Man

Working on their own and without a company structure to support them. They just get on and do , what they do.

Who lived off St James’s Square prior to the 1848 Revolution and his return to Paris in that year. I imagine he must have felt a fair bit of excitement, energy (and some trepidation) in this house !!

Looking down, instead of Looking up

I have always sought a fresh perspective by ‘looking up’ in cities (this thought inspired my website – lookupmore.co.uk) but this time I looked down. I found it helped focus my thoughts really well

Instead of looking and listening, I tried touching things. Perhaps the most under used Sense? This made me more sensitive to, and more aware of, my surroundings and my thoughts

Walking in a quiet arcade off Piccadilly, I found the gallery of Stephen Wiltshire. He paints marvellous, detailed pictures after seeing a location for a brief period of time only

On the video running in the window was the wonderful quote –

Passing an art gallery focusing on Art from Afghanistan, I was reminded of wider problems in the world and how lucky we are – to express ourselves and pursue our dreams

Finding Space in the City

Finding Time in the City

It is possible to take time out of the hurly burly , get some peace and be creative. Street Wisdom only lasted 2 hours but I felt I had been away for ages

What else did I learn?

Go on a Street Wisdom session!!

I really can’t recommend it enough.

Something pretty special happened to me out there.